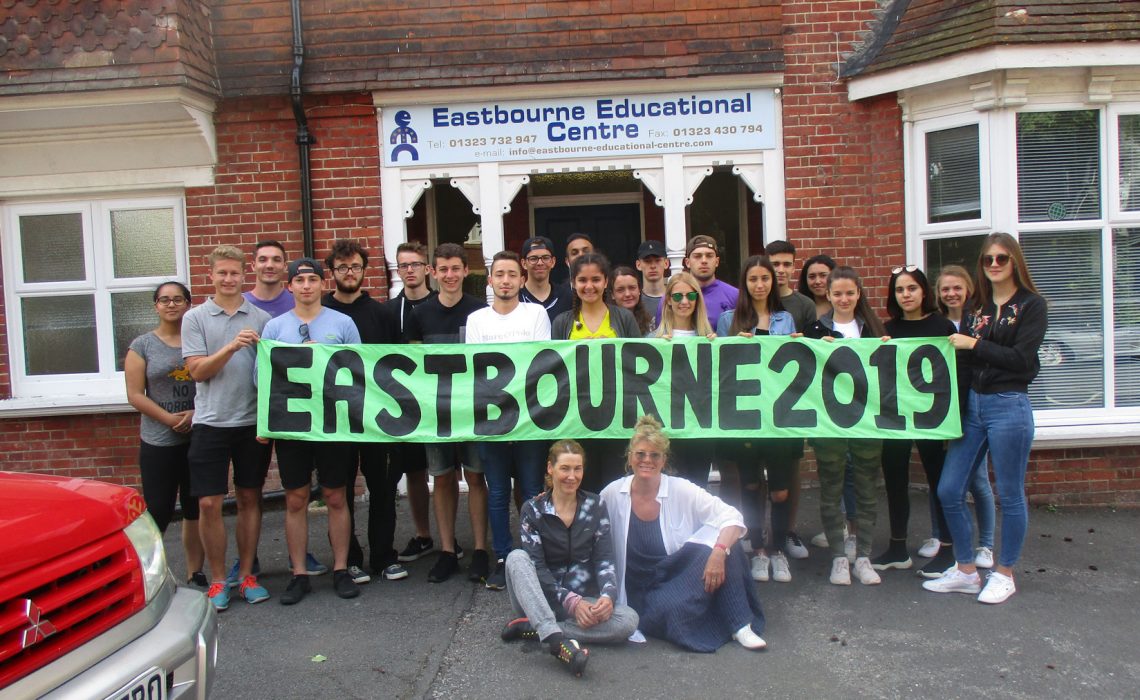 Our trip started at Innsbruck airport where we caught the plane to London Heathrow, which we reached after about one and a half hours. We took a coach from the airport to Eastbourne for about two hours.

Our host families picked us up at Eastbourne railway station. They were all really nice and friendly, only one family did not talk so much with their two guest students. At our host families we got breakfast and a packed lunch and we had dinner with them almost every evening where we also talked in English with them.

On Monday morning we went to school for the first time. We had English classes from 8.30 until 13.00 on Monday, Tuesday, Thursday and Friday. There we spoke a lot of English, which was good for improving our language skills .

On Monday afternoon we had an Eastbourne orientation tour to get to know the town better. In the evening we went to the cinema to watch Toy Story 4 or Men in Black. On Tuesday afternoon we took the train to Brighton. There we went on a Street Art Walking Tour with our guide Lyn who showed us very impressive Street Art paintings and told us interesting details about the artists.  According to our guide Brighton is ‘the hippest city in the world’. After that some of us had Brighton’s famous fish and chips at the Pier.

Wednesday was a big day because early in the morning we went to London for the first time. There we split into two groups. One went on a guided tour at Arsenal Football Stadium and the other group took the tube to The Bank of England Museum where they learned many things about money and other functions of the Bank of England. After that we had a free afternoon to explore London. Some went to Tower Bridge, to the London Eye or did some shopping in Oxford Street. In the evening we met at the Apollo Victoria Theatre to watch the musical Wicked which was about the friendship of two witches. It was really beautiful.

On Thursday afternoon we walked to Beachy Head. It was a very exciting trip but also quite exhausting and a bit windy. We hiked up the cliffs and on the top we enjoyed a great view of Eastbourne and the sea. Friday was our last day at school. After a free afternoon at the Pier we had a nice evening at the Bowling centre. However, we didn’t go Bowling there but formed two teams who fought against each other in a Laser quest game.

On Saturday morning we went to London again where one group went to visit The London Dungeon and the other went on a River Cruise Tour on the Thames to see and learn all about interesting places along the river. After that we had some free time to explore other sights like Buckingham Palace, for example. Later we all went to Spitalfield’s Market, which is a lively market with many small shops and cafes. Our last attraction in London was Sky Garden, which is located in a 160m high modern building. On the top we had a fascinating view of London.

On Sunday it was time for us to say goodbye to Eastborne. On our way back to London Heathrow we went via Windsor to have a look at famous Windsor Castle, which is the Queen’s favourite weekend home. After that we went to Heathrow airport to catch our plane back to Munich and from there a coach took us back home to Hall.

I think this school trip to England was a wonderful experience for our class and we had a great time. I am pretty sure I will visit London again soon.